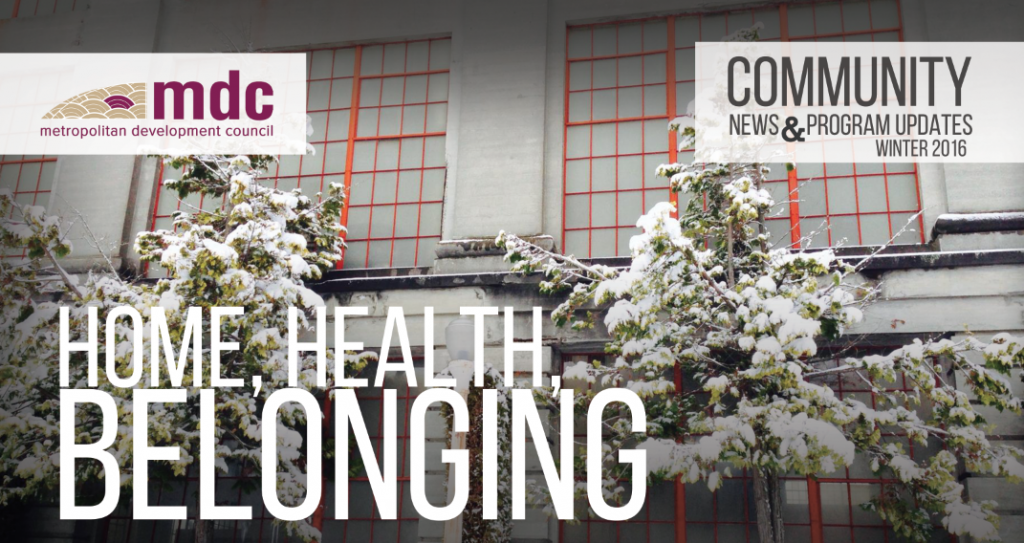 The results of the election will bring change in 2017. We don’t know for sure as a community what that change will be. What we do know is that our neighbors have been struggling throughout 2016, and those challenges are likely to continue in the new year.

We started 2016 with the information that 1,762 people were homeless in Pierce County, and that homelessness had increased 35 percent over the previous year. And we will have a better idea of the current trends following the 2017 Point In Time Count in late January.

Our work together as a community to address the root causes of homelessness is more important than ever. Please join us to create a shared voice and to muster all of the resources we have to protect our immigrant and refugee families, people of color, people of all faiths, people of all sexual orientations and identities, and people with disabilities. To reject classism and misogyny, and to respect men and women alike. And to continue to work tirelessly to protect those who may not have a voice from bias, injustice, discrimination, and hatred in all of its forms.

Here at MDC, we remain committed to our vision:

“An equitable community with engaged individuals, working together to improve the health and well-being of all community members. We want a safe place to live, raise a family, and to find meaning and purpose in our daily lives.”

Our first action in 2017, which you can help us with, is to open 14 units of new housing for young adults who are currently homeless.   Please contact Rob McNair-Huff at rmcnairhuff@mdc-hope.org to explore how you can contribute your treasure, time or talent to creating new homes for homeless young adults in the new year.

ALEX’S JOURNEY THROUGH HOMELESSNESS TO HOPE 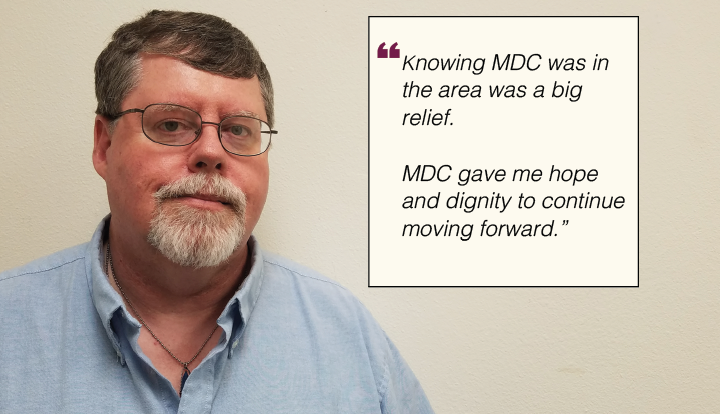 Alex has his share of experiences with homelessness.  Alex’s military career took a hit due to layoffs in the 1990’s. He’d taken several jobs since then, but the strain of going from career miltary to a “regular working person” in roles that did not match his skillset, weighed heavily. “It was a big mindset change to go from Captain America, defending this country, to just another working person.”

One job offered long hours of physical labor that at 40 was a shock to his system. “Being military, I only ever had an office job. Now, I’d come home from work, after a grueling day.  My ex would run me a hot bath, give me a couple of aspirin and a beer. One beer became two and two beers became three.  To cope, I drank more and more.”

Heavy alcohol use to self-medicate would eventually lead to the loss of his job and ultimately a divorce. With no job leads and dwindling savings, he was running out of options. “I’d been so long-term unemployed, that no one was hiring. When it came down to a 3 day pay or vacate, I put the key on the kitchen counter, grabbed some clothes and got in my car.  I basically gave up.  I couldn’t find work, it looked like I was going to be homeless, so I thought, maybe the Veterans Administration would help.”

During his first six months of homelessness, he worked in a therapy program with MDC healthcare, where he voluntered at the front desk, while seeking full-time employment.  He also found housing during this time.  For one year, Alex worked, paid rent, and saved money, all while continuing his job search.  Unfortunately, barriers to employment persisted, money ran out, and Alex was entering homelessness again.  He turned to MDC once again for help.

”Living in my car, my first stop in the morning was MDC’s Hygiene Center to get a shower, and once a week to do laundry.  Knowing MDC was in the area was a big relief.

MDC gave me hope and dignity to continue moving forward.  Because I participated in the work therapy program, I was aware of the programs that MDC offered like the Hygiene Clinic and services for veterans like me.”  Through perserverence, he secured housing again and through veteran services acquired cleaning supplies and furniture he would not be able to afford on his own.

Today, Alex volunteers as a peer counselor for a local mental health services organization. With six credit hours of psychology and two and half years counseling experience under his belt, he plans on pursuing a role as a full time certified counselor.

WEATHERIZATION: A WARM HOME THIS WINTER