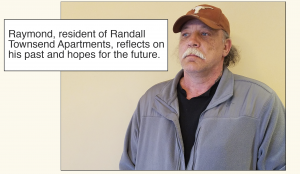 As a child, Raymond was mentally, physically, and sexually abused, almost on a daily basis, by those he trusted the most. The trauma and fear created from his experiences as a young man developed well into his adulthood. The result was a hurt, angry, and untrustful man who had a difficult time interacting with people.

One of my biggest fears was that people were out to hurt me,” Raymond recalls. “Everybody who had been in my life didn’t want me for me; they wanted me for what they could get. When you are taught that from birth until you’re 50, that kind of thinking is hard to reverse, because you don’t know any other way of life.” For many years, Raymond lived on the streets, hitchhiking from city to city, picking up odd jobs for survival, but never settling down long enough to establish roots or a home. He didn’t like people, and his greatest obstacles were his fears and his traumatic upbringing, ultimately resulting in Post Traumatic Stress Disorder.

“I was doing absolutely nothing with my life. People didn’t give me a chance because they accepted what they saw, instead of accepting what they didn’t see: a human being,” says Raymond.

In 2016, Raymond decided to seek help. He knew that if he did not turn his life around soon, he would never turn back. That is when he knew he had to take charge of his life, especially mentally, and he discovered MDC.

“I came to Randall Townsend on September 7th of 2016, and it was the first time in my life I’ve ever had my own place. MDC has
provided everything that I’ve needed, they have been patient and kind,” he said. “By seeing a mental health counselor weekly, the staff have helped me push beyond the fears that kept me stagnant for so long.”

Raymond has shown amazing progress by volunteering to prepare holiday meals and monthly birthday cakes for his neighbors. He leads by example and encourages many Randall Townsend residents to lend a helping hand to their fellow neighbor.

“Living at Randall Townsend has given me an opportunity to be what I want and need to be. I know that in order for us to live as a community, we have to participate as a community. I love to cook, and one of the tactics I use to get people out of their rooms is food,” says Raymond.

Currently interning at The Rescue Mission, Raymond was given the opportunity to work in the Emergency Shelter Center and the Good Neighbor Cafe, doing what he enjoys the most, cooking. He is also working on an
application to become a peer counselor. Raymond’s determination to turn his life around, has led him to help others in the community.

Raymond proudly concludes,“MDC has helped me to bring my potential to light and I am happy with the person I have become.”