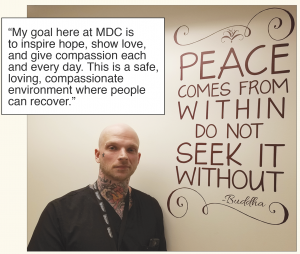 Joshua grew up in a good home, but his own struggles with mental health, at a young age, became unbearable for him to deal with alone. His parents were unaware of their son’s mental health and he desperately wanted to find answers. In great pain, he turned to drugs to cope, and in 1997 he slowly began his descent into addiction.

“It was me trying to medicate, to figure out what was going on with me mentally,” recalls Joshua. “The only way to figure it out was to use substances.”

His revolving substance use for roughly 19 years, saw him in and out of psychiatric hospitals, and it was here that he was diagnosed with bipolar and schizoaffective disorder. Combined with his methamphetimine addiction, it was a constant struggle to stay balanced on any given day.

“Because of my addiction, I was in and out of treatment”, he said.
“I experienced chronic homelessness, living under a bridge in a train tunnel in Olympia. I attempted suicides and was involved in criminal activity. My life was devoted to getting substances, any way I could, to make up the difference in what I was experiencing mentally.”

After being incarcerated, Joshua had hit bottom and it was time for a change. During this time, he befriended an officer who inspired him to turn his pain into progress. He got into a 12-step program, started seeing a therapist, began taking this medications correctly, and even started a clothing line. His clothing line Break the Cycle, displays messages of hope and inspiration for those experiencing substance use disorder and co-occurring issues.

“The clothing line was an opportunity to creatively express that as addicts, we are not alone, to create awareness, and to break the stigma around addiction and mental health,” states Joshua.

As he continued rebuilding his life, he had the desire to help others in the community. He began networking with local Certified Peer Counselors and was soon introduced to a role at MDC as a Mental Health Technician.

“Being a mental health technician at MDC is more of my niche because this is where people really need hope,” explains Joshua. “Sometimes they are so lost inside of themselves that they need someone to say, this is not the end.”

Joshua is currently completing his Associates degree in Applied Sciences and Human Services at Tacoma Community College. His clothing line will appear on Discovery Channel’s The Deadliest Catch this year, carrying his message of hope to a larger audience.