A Message to the Community from President and CEO Pamela E. Duncan 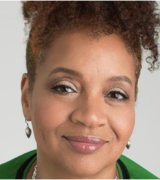 I have had to sit with this letter for some time before releasing it to allow it to marinate within my spirit and to ensure that everything that needs to be said within my role and sphere of influence gets spoken. As some of you know, I have thought about what is most critical to convey and have wrestled with “how to say it.” I have conversed/conferred with family, friends, colleagues, and listened to staff share their pain and discomfort. Like you, I have read many position statements and letters to the community—many profound, some not so much. Given where we all have inevitably found ourselves, the best I can state is my truth to power, and how MDC commits to being a change agent for good.
It was not the death of George Floyd, a Black man in police custody, that was the last straw.
It was not even the recording of the death of George Floyd, a Black man in police custody, that was the last straw.
It was the culmination of yet another Black person dying—this time captured in the recording of George Floyd, a Black man, whose neck was under the knee of a white police officer with his hands in his pockets and a cavalier expression of impunity and IMMUNITY for almost nine minutes, in the presence of fellow police officers who did nothing to stop him but rather stood guard allowing this horrific act to happen, in the presence of others who cried, “you’re killing him!,” and now in the presence of an entire world – in addition to so many other Black women and men, many whose names we may never know, who have died at the hands of police without justice being served—THAT is what became the tipping point for racism in this country and the LAST STRAW.

I don’t write to merely condemn the act.

I don’t write to merely condemn the brutality inflicted upon Black people for more than 400 years in this country.

I write to express my condemnation of the dominant culture—white America—for not listening and not caring to change the status quo. I write to condemn the fallacy called race. This purely social construct has now caught the full attention of the world, already on pause during the global coronavirus pandemic, and puts America under a microscope with a focus turned to intense scrutiny questioning, “What are you going to do to rectify this mess?”

I write to condemn the acts of this country that prove, through legislation, through ignoring demands for reparations, through picking and choosing to whom it makes apologies for wrongs it has committed and condoned, that it harbors an innate disdain and dismissal of the value of Black people.

I write to help myself consciously process through the layers of what is happening and to allow my psyche to grieve in the midst of this madness.

And, as the President and CEO, I write to state the position and establish the role of Metropolitan Development Council (MDC) as a Community Action Agency in the midst of this big, sudden, and of profound necessity, raging change of events.

MDC needs look no further than to its own roots as a Community Action Organization that was created during the Civil Rights Movement to fight the War on Poverty. Although uniquely established and charged to address the social determinants of poverty, for far too long MDC has been silent at the intersection of social justice, anti-poverty, and anti-racism work. It’s too uncomfortable. It’s the big work that no one can figure out how to tackle or even wants to. What will happen to our funding if we make this type of statement? Quite frankly, there has not been leadership at MDC that understands what it is like to have the experience of living while black, much less be able to relate to it, until now.

We know that systemic racism continues to hold back Black and brown people in our community, and we know that it is absolutely the time to dismantle those systems and create true equity. It is beyond time to center the voices of those in communities of color to create solutions and move the people of Tacoma and Pierce County forward.

MDC cannot continue to be a quasi-governmental entity that makes a name for itself by backing into funding and then providing transactional services. As an anti-racism, anti-poverty, social justice-focused organization, MDC must recreate its narrative based upon making a transformational impact in the lives of those who, for years, have been marginalized, overlooked, and oppressed.
As a Community Action Agency, it is our responsibility to walk alongside those whom we serve to co-create pathways that manifest sustainable change leading out of poverty.
As a Community Action Agency, it is our responsibility to be in the midst of and convene community to discuss the critical social issues of our time and to ensure that we make space for the voices of the unheard, the dismissed, the devalued, and the disenfranchised. We know that Black lives matter, and the only way our community can truly move forward in equity is to support the struggle of those who have been and continue to be the subject of systemic racism.
As a Community Action Agency, it is our responsibility to advocate for, and educate the community on, legislation and policies that promote equity. We support and urge Congress to pass H.R. 40, legislation that proposes to address the fundamental injustices, cruelties, brutalities, and inhumanities of slavery by the creation of a commission that recommends appropriate reparations. We support Tacoma Mayor Victoria Woodards and the Tacoma City Council and every community in Pierce County in calls for independent investigations into the death of Manuel Ellis and all others who have died as a result of racist policing policies. We expect that change is made in how our communities are protected with equitable, measurable accountability.
We promise to show up in the spirit of equity with our staff, clients, Board and community stakeholders. For everyone who asks, “What can I do to help?”, educate yourselves. Here is a list of growing resources at everyone’s disposal.

To our community, as we move forward and we walk the talk of anti-racism, social justice, and anti-poverty work, know that MDC is already re-examining it’s purpose and work. In an environment already changed by COVID-19, we have to take a hard look at where we can be most impactful. We will be inviting further discussion centered in our communities of color to determine what should be done and how MDC and our community move forward together. We strongly encourage our sister Community Action Agencies to do the same. We are in a space and time that requires us to do so. It will be messy, uncomfortable, head-aching work. This is life-altering essential work. And it must be deliberate if we want to see impactful change. Everything that we are all doing to make changes must move from words to strategic action, and serve as our collective new foundation.

Now is the time for all of us to make the radical changes that we need to be a truly healthy society. I am personally committed to the long haul and I welcome your participation to work together.  My email is PDuncan@MDC-HOPE.org. If we don’t take action now, then what are we waiting for?